Home » Corporate Creativity » You are reading »

Over the years, I’ve seen countless great ideas die from bad judgement. The decision-makers will often say things like ‘I’m just not feeling it’ or ’that makes me feel uncomfortable’ or ‘I don’t know what the right idea is but I’ll know it when I see it’.

These individuals think they’re doing the right thing. But they’re operating under the misunderstanding that because creative ideas arise from an environment where emotion reigns supreme, that they should judge ideas using their emotions too.

I want to use a little science to explain why they’re wrong.

The concept of the ‘gut reaction’ comes from the fact that we very often feel a response to situations in our belly or chest. It’s clear that external stimuli can have a physiological effect, making us ‘feel a bit funny’.

We’ve long known of the connection between the digestive tract and the mind. Our digestive system is home to our enteric nervous system, which contains about 100 million neurons. So it’s no surprise that it’s also referred to as the second brain. But what might be surprising is that 90% of the connections between the gut and the brain only flow in one direction – and that’s upwards. The gut clearly has a bigger effect on our thinking than our thinking has on the gut.

When we’re highly stressed, we go into a state that’s known as ‘fight or flight’. Our adrenal medulla floods our systems with epinephrine and norepinephrine. Our digestive tracts grind to a halt, our bladders relax, our heart rate increases, blood vessels open up and we can go pale or flush as blood is redirected around our system.

But there are other physiological states that affect the way our minds work – sexual arousal, hunger, tiredness, relaxation. Each state alters our motivation and focus, causing us to view situations through different lenses.

It was assumed that the emotions we felt created these physiological reactions but a current theory is that we experience the physiological state first and then we scan our environments for cues before we interpret it as emotions.

These physiological reactions aren’t peculiar to humans. They happen right across the animal kingdom. When you see a gazelle being chased by a lion in a nature documentary, they’re experiencing the same fight or flight response. Humans spent the majority of their evolutionary development in the same environment as these wild creatures, dealing with similar risks. Cities only came around about 250 generations ago and only in the last few years has the balance tipped so that more people are living in cities than not. There simply hasn’t been enough time for us to evolve more civilised nervous responses.

We are all still beasts.

The office is the modern prairie

These days the typical city-dweller spends the majority of their waking hours in an office environment. In recent years, Evolutionary Psychologists have been using their theories of how the human mind developed to explain our irrational behaviour in modern environments. And many of them believe that traditional management styles and organisational structures are at serious odds with the way humans are wired.

Stress is our modern day lion. And offices are its natural habitat. More than 40% of workers describe their job as very stressful or extremely stressful. These are shocking statistics. Workplaces are making people’s lives miserable. It’s no wonder that over 70% of workers are disengaged. The office is a psychological battleground. And the stress it creates puts us into a state of hyperarousal, causing us to respond in less-than-ideal ways.

Looking at offices from a Social Psychology point of view is similarly dismal. The typical hierarchical structure creates power struggles and pecking orders that are analogous with tribal societies. These structures affect people’s motivations that in turn colour their decision-making. If you are motivated to make decisions that will make you look good to the powers above, you are no longer motivated to do the best thing for the organisation itself.

What this means for creative ideas

Ideas that are fresh and original will naturally make people feel uncomfortable.

The natural human desire is to escape any feeling of discomfort. And the only way to do that is to say ‘no’. To eliminate the threat. To kill the idea.

Humans have a physiological and psychological aversion to fresh thinking.

This is where the importance of a good brief comes in.

When you write a brief for a project, it will hopefully include everything that you’re hoping to achieve. it should set out criteria that describes what success will look like. These criteria should be free of anything that requires emotional judgement. Focus on criteria you can judge objectively.

So, as well as setting the thinking off in the right direction at the start, the brief also takes on the role of giving some rational criteria to measure things against at the end. The idea that ticks all the required boxes in the best possible way should be the goer – regardless of how anyone feels about it.

If you’re still unsure, you can do another rational thing and test the ideas. (Testing is different to researching. It’s about prototyping and trying things out for real. Research is more likely to build on your fears than to allay them.)

Sometimes a bad reaction is a good thing

In some situations, the gut can be useful in judging ideas, if you know how to interpret it.

Gut can be useful in judging ideas, if you know how to interpret it

If you’re wanting to get something noticed by the public, you’ll have a better chance of doing that if it makes them feel something. If it causes a reaction in them – even a feeling of discomfort – you’ll have more chance of grabbing their attention. So, in this case, making decisions on trying to eliminate uncomfortable ideas is in complete opposition to the purpose of the activity, which is to get noticed and make a connection with your audience.

The wisdom of experience

However, when you’re making decisions about something new, you’ve had no chance to build up the depth of experience to make a flash intuitive judgement. In this case, the issue isn’t fear – it’s misguided confidence. And it can be just as destructive.

So, again, it’s probably better to go for a more considered rational approach.

I don’t for a second believe that the decision-makers who use their gut or intuition to judge ideas are doing it from a bad place. It’s simply a misunderstanding. They’re unlikely to have been taught how to make decisions and the people who are presenting ideas to them are just as much in the dark.

Everyone involved assumes that every area of the process should involve subjectivity and ‘feel’ from start to finish. But I believe things would be much more satisfying for everyone involved if we all agreed to create emotionally and judge rationally.

http://openforideas.org/blog/2016/11/10/sometimes-you-shouldnt-trust-your-gut/https://i0.wp.com/openforideas.org/wp-content/uploads/2016/11/gut_reaction.jpg?fit=1024%2C576https://i0.wp.com/openforideas.org/wp-content/uploads/2016/11/gut_reaction.jpg?resize=150%2C1502016-11-10T14:25:43+00:00Dave BirssCorporate Creativitycorporate,creativity,emotional,enteric,evolutionary psychology,gut,instinct,judge,physiology,psychology,rational,social psychology
Over the years, I’ve seen countless great ideas die from bad judgement. The decision-makers will often say things like ‘I’m just not feeling it’ or ’that makes me feel uncomfortable’ or 'I don’t know what the right idea is but I’ll know it when I see it'. These individuals think...
Dave BirssDave Birssdavebirss@gmail.comAdministratorDave is obsessed with creativity. He's been a musician, illustrator, stand-up comedian, poet, radio DJ, television presenter and advertising creative director. He also wrote A User Guide to the Creative Mind. Now he runs Open for Ideas and helps individuals and companies become more creative. You can find him speaking at conferences all over the world. And sharing his thinking in boardrooms, universities and dimly-lit pubs.Open for Ideas

Founder and Editor at OpenForIdeas.org
Dave is obsessed with creativity. He's been a musician, illustrator, stand-up comedian, poet, radio DJ, television presenter and advertising creative director. He also wrote A User Guide to the Creative Mind.
Now he runs Open for Ideas and helps individuals and companies become more creative.
You can find him speaking at conferences all over the world. And sharing his thinking in boardrooms, universities and dimly-lit pubs.
Tagged in corporate creativity emotional enteric evolutionary psychology gut instinct judge physiology psychology rational social psychology

View all posts by Dave Birss →
Dave is obsessed with creativity. He's been a musician, illustrator, stand-up comedian, poet, radio DJ, television presenter and advertising creative director. He also wrote A User Guide to the Creative Mind. Now he runs Open for Ideas and helps individuals and companies become more creative. You can find him speaking at conferences all over the world. And sharing his thinking in boardrooms, universities and dimly-lit pubs.

Thought Disrupted: living in the age of constant digital distractions and staying present

When the going gets tough, the tough get playful 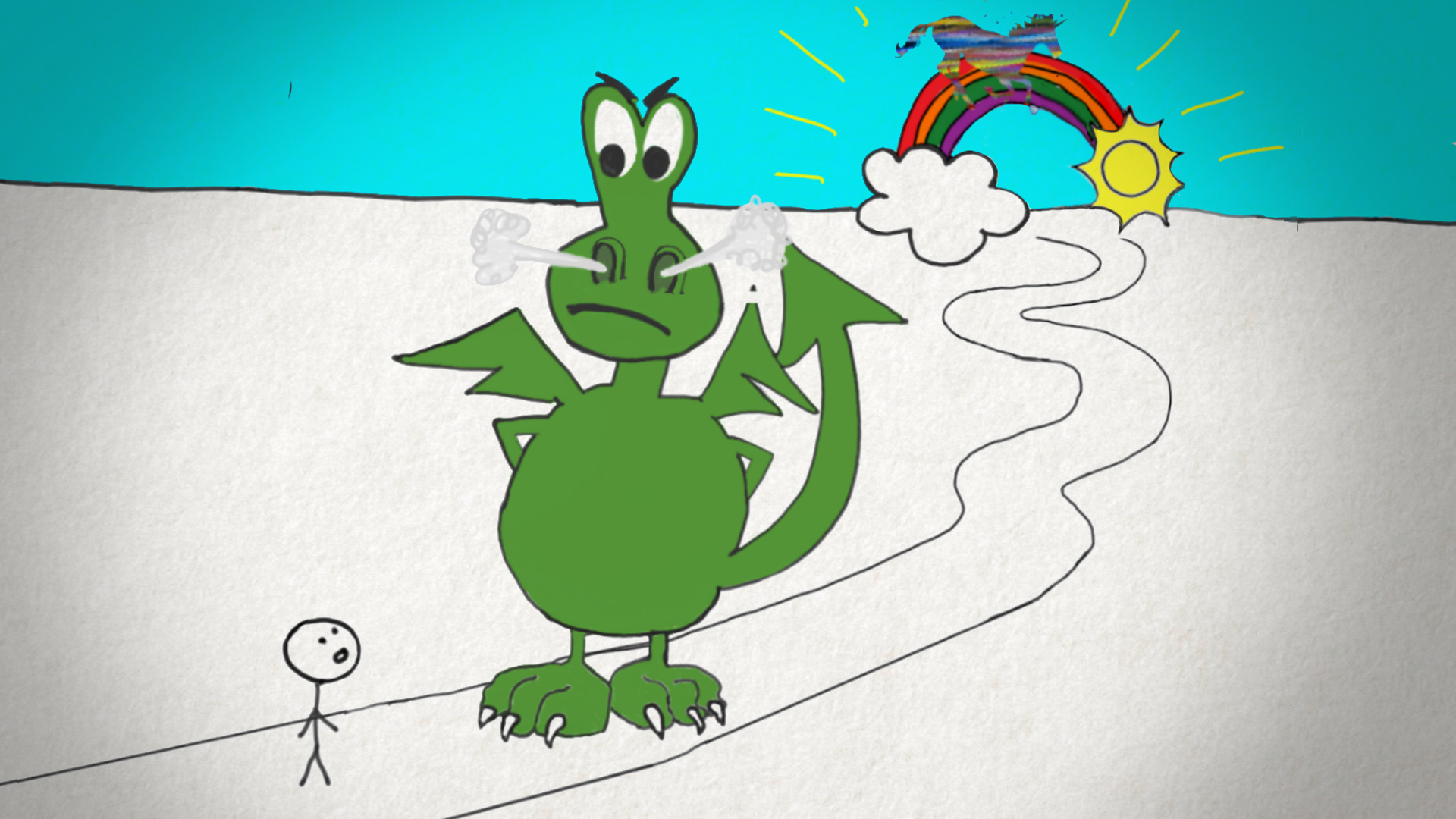 «Next Post Trump won. What else are you wrong about?
Being a great idea-generator isn’t about talent Previous Post»

Looking for something specific?